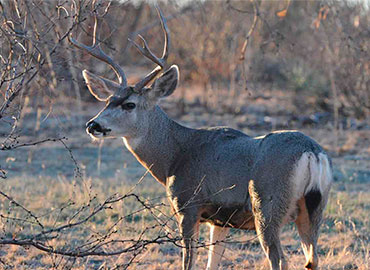 Geography – Range
Throughout the entire western United States, including the four deserts of the American Southwest.

The Cervidae Family includes deer and their allies, including moose, elk, and caribou. Member of this family occupy a wide range of habitats, from arctic tundras to tropical forests, and can be found over most of the world. All have slender legs. Most are brown or gray in color, with white spots characterizing the young, and in a few species, the adults. In all but one genus of cervids, at least the males have antlers.

Comparisons
The Mule Deer, while closely related to the eastern species-the white-tailed deer, are remarkably distinct in their biological, ecological, and behavioral attributes.

The Mule Deer carries its thin, black-tipped tail drooped, unlike the uplifted, bushy white tail of its cousin. They have a distinctly different gait from the leisurely, graceful leaps of the white-tail. When startled, a Mule Deer will move in a series of stiff-legged jumps with all four feet hitting the ground together.

Mule Deer are usually a dark gray-brown, with a small white rump patch and a small, black-tipped tail. Their large ears are distinctive. White-tail deer are tan in color, with a larger tail.

Mule Deer antlers are normally smaller and branch to form 2 equal forks, while the male White-tailed Deer has forward curving antlers with a number of points (tines) branching from the main beam.

Description
Mule Deer have large ears that move constantly and independently, from whence they get their name, “Mule” or “Burro Deer.” They do not run as other deer, but have a peculiar and distinctive bounding leap (stotting) over distances up to 8 yards, with all 4 feet coming down together. In this fashion, they can reach a speed of 45 m.p.h. for short periods.

This stocky deer with sturdy legs is 4 to 6-1/2 feet in length and 3 to 3-1/2 feet high at the shoulder. During the summer, the coat on its upper body is yellow- or reddish-brown, while in winter more gray. The throat patch, rump patch, inside ears and inside legs are white with lower portions running cream to tan. A dark V-shaped mark, extending from a point between the eyes upward and laterally is characteristic of all Mule Deer but is more conspicuous in males.

Males are larger than females. The bucks’ antlers, which start growth in spring and are shed around December each year, are high and branch forward, forking equally into 2 tines with a spread up to 4 feet.

The Mule Deer is slower and less colorful than the White-tailed Deer, but its pastel, gray-buff color provides a physical adaptation to the desert environment which disguises it from predators like the Cougar, the Coyote and the eagle who will swoop down on a fawn.

Mule Deer have no canine teeth and, like the cow, have a multi-part stomach, the first two chambers of which act as temporary storage bins. Food stored here can be digested later when the deer chews its cud.

Tail
The tail is usually tipped in black with a white basal portion, and its under parts are white.

Ears
The Mule Deer large ear is gray on the outside and white on the inside.

Feet
Another physical adaptation, its larger feet, allows the Mule Deer to claw out water as much as two feet deep, which it detects with its keen sense of smell.

When startled, a Mule Deer will move in a series of stiff-legged jumps with all four feet hitting the ground together. This gait offers two advantages: it allows the deer to out-distance predators in rough terrain, and to see above the thick brush. If necessary, they can turn or completely reverse direction in the course of a single bound.

Mule Deer are active primarily in mornings, evenings and moonlit nights. This inactivity during the heat of the day is a behavioral adaptation to the desert environment that conserves water and keeps the body temperature within livable limits. Sweat glands and panting also provide evaporative cooling during hot periods.

During the middle of the day, the Mule Deer beds down in a cool, secluded place. The mature buck seems to prefer rocky ridges for bedding grounds, while the doe and fawn is more likely to bed down in the open.

Habitat
Mule Deer moves between various zones from the forest edges at higher elevations to the desert floor, depending on the season. While the Mule Deer occupies almost all types of habitat within its range, it seems to prefer arid, open areas and rocky hillsides.

Food & Hunting
Food of the Mule Deer is quite varied. In Spring and Summer it feeds on green leaves, herbs, weeds and grasses more than on browse species. The reverse is true in Fall and Winter.

Mule Deer are browsers and eat a great variety of vegetable matter, including fresh green leaves, twigs, lower branches of trees, and various grasses. They are particularly fond of blackberry and raspberry vines, grapes, mistletoe, mushrooms and ferns. They eat so carefully they can even consume the fruit of cactus.

Breeding
The mating season for Mule Deer reaches its peak in November and December, as antlered stags round up females and fight for their possession. Antlers are shed after the breeding season, from mid-January to about mid-April. Most mature bucks in good condition have lost theirs by the end of February; immature bucks generally lose them a little later. Males and females mix freely while traveling together in groups during winter months, often down to the desert floor.

Dominance is largely a function of size, with the largest males, which possess the largest antlers, performing most of the copulations

Mule Deer breed in late November and early December. A buck will find a suitable doe and they will often play chase games at breakneck speeds before mating. They will remain together for several days.

When antlers start growing again in the spring, the group breaks up. The females go off by themselves and eventually give birth and nurse their young; the males wander in friendly twosomes or small bands throughout the summer months as antlers grow.

From April through June, after about a 200-day gestation period, the doe delivers 1 to 4 young (normally 2). Fawns are born in late May or early June. A doe will usually produce a single fawn the first year she gives birth and then produce twins in following years. The fawn, colored reddish with white spots, weighs about 6 pounds at birth. It must nurse within the first hour and stand within the first 12 hours. During early weeks of life, the fawn sees its mother only at mealtimes for feeding. Spots begin to fade by the end of the first month.. They have white camouflage spots and are further protected by having little or no scent. Fawns usually stay with the doe for the first full year.

Conservation
Life span in the wild is 10 years, but Mule Deer have lived up to 25 years in captivity.

All federal, state, and provincial land and wildlife management agencies recognize the fundamental need to maintain Mule Deer ranges and keep them habitable. To counter the trend of agricultural development, rangeland conversion, mining, road and highway construction, and the development of housing tracts, many states and provinces have purchased critical areas, especially winter ranges, to maintain the various habitats of Mule Deer. But, due to political opposition to government acquisition of privately owned lands, plus a scarcity of funds for this purpose, only a small fraction of Mule Deer ranges has been acquired by the government.

Cautions
There is some competition between the Mute Deer and the livestock on the range, especially in Spring and early Summer. Also, Hoof and Mouth Disease and other diseases can be transmitted from the Deer to the livestock and vice versa.

Douglas fir and Ponderosa pine are of major economic importance for commercial timber. However, these trees are browsed heavily by O. hemionus. Browsing of other trees is seldom considered an economic problem. This situation invites browsing of sufficient intensity to influence forest regeneration in many areas.

Mule Deer is a target for various viral, bacterial, and parasitic diseases. For example, heavy amounts of gastrointestinal nematodes may cause death in Mule Deer. This parasitic disease is usually indicative of such predisposing factors as high Mule Deer density and malnutrition.

Interesting Facts
Mule Deer is an excellent swimmer, but water is rarely used as a means of escaping predators.

The annual cycle of antler growth in Mule Deer is initiated and controlled by changes in day length acting on several cell types of the anterior pituitary.

For Native Americans and early European settlers, deer meat (venison) provided one of the most important sources of protein.

Deer hides were used to make buckskin jackets, moccasins and other leather articles.