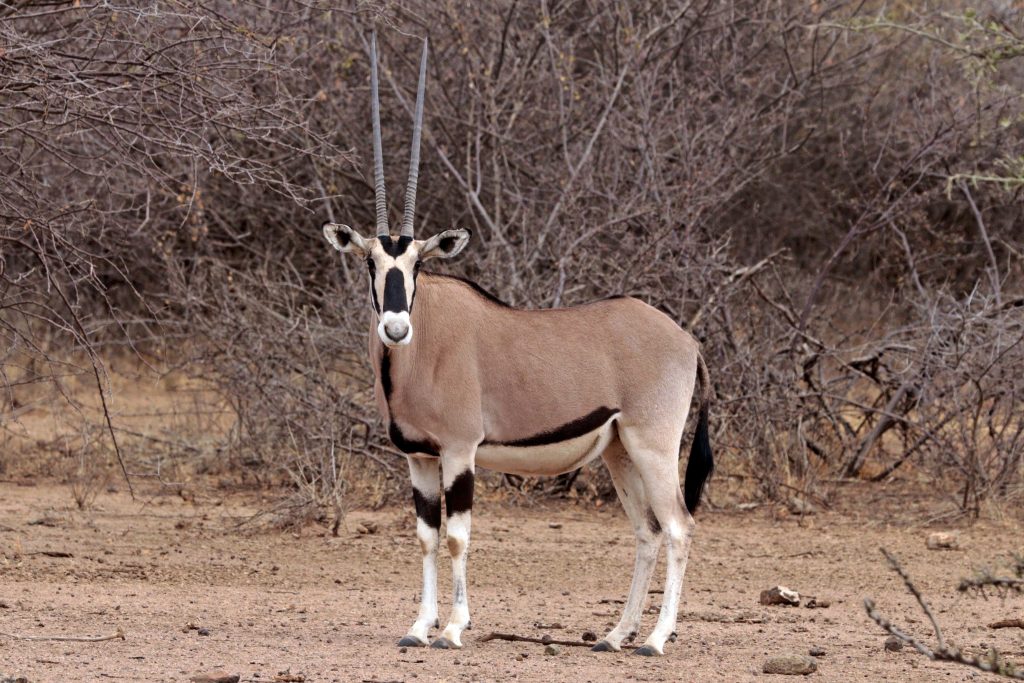 Characteristics
The oryx is a large antelope of striking appearance with long, spearlike horns. It has a thick, horselike neck with a short mane and a compact, muscular body. A defined pattern of black markings that contrast with the white face and fawn-colored body are prominently displayed in dominance rituals to emphasize the length of horns and strength of the shoulder.

The head is marked with black triangular patches and broad black stripes that extend from the base of the horns over the eyes to the cheeks. A ring of black encircles the throat and runs down the neck to the chest. The ears end in a black tip (a black tassel hangs from the ear tip of the fringe-eared oryx). A narrow black stripe runs along the spine, and another one separates the lower flank from the white underparts of the body. The white forelegs have a black ring above the knee and a black patch below. The black tail tassel reaches to the hocks.

The oryx’s ringed horns are up to 30 inches long, making them formidable weapons. The female’s horns are often longer and thinner than the male’s.

Description
This is a powerful-looking antelope with a well-defined pattern on the head and body. On the face, there are three black stripes alternating with three white ones. There is a black stripe running down the center of the back. The white underside is separated from the gray flanks by a black line. The tail is long and has a black tuft. The horns are nearly straight and almost parallel, and average about 30 inches long. The female’s horns are usually longer and slimmer. There are two distinct races of gemsbok: a northern form which often has its ears fringed in black, and a southern form with longer horns, rounder ears, and a darker rump. Length of head and body is up to six feet, shoulder height about 4 feet, and it weighs up to 450 pounds.

Behavior
The social system of the oryx is unusual in that nonterritorial males live in mixed groups with females, or with females and their young. Males that dominate are territorial to a degree, marking their areas with dung deposits. Groups are composed of 10 to 40 males and females of all ages and both sexes; herds of up to 200 are common in some East African habitats.

The dominance hierarchy among oryx is based on age and size. As they grow, calves test one another in what look like games, though in reality are tests of strength. As the hierarchy becomes established, the need to fight is reduced. Ritual displays replace actual contact, except when evenly matched individuals may have to fight to establish their rank. Along with lateral displays, oryx perform a slow, prancing walk and sometimes break into a gallop. When several males are making these displays, they may clash horns.

Herd composition in the wild constantly changes according to need. Oryx wanting to drink, for example, form a group to go to water, or females with young form a group that moves more slowly. The result is a social system that allows for individual needs but retains the advantage of group living. Oryx range widely over a large area, but their keen sense of smell alerts them to rain in the area, so that groups quickly assemble, often in herds of 200 or more, to feed on new growth.

Habitat
Originally, various oryx species were found in all of Africa’s arid regions. One species that occurred on the Arabian Peninsula was exterminated recently but has now been reintroduced into the wild from captive stock. Well adapted to the conditions of their hot, arid habitats, oryx can live as long as 20 years.

Food
Oryx typically feed in early morning and late afternoon and sometimes on moonlit nights. Their diets consists mainly of coarse grasses and browse from thorny shrubs. In desert areas they consume thick leaved plants, wild melons, as well as roots and tubers they dig out of the ground. They may drink if water is available but can survive days or even weeks without it.

Plants growing in arid areas inhabited by oryx have also adapted to the hot, dry conditions and either store water or have mechanisms to prevent excess loss. Plants collect dew, gradually releasing it during the hotter parts of the day. Some plants increase their water content by 25 to 40 percent, so when oryx feed late at night or early in the morning, it provides them with both food and water.

Breeding
Like other antelope species, oryx primarily depend on flight to escape from predators such as lions, wild dogs and hyenas.

Interesting Facts
The oryx is a good example of an antelope that has successfully adapted to the harsh conditions of dispersed food, intense heat and little or no water. The female comes into heat soon after giving birth. The more frequent estrus cycles enable females to produce calves at 9-month intervals.